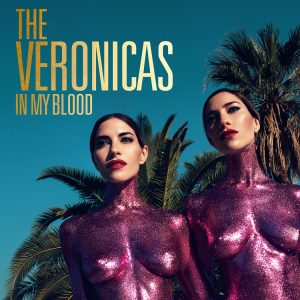 Sony Music Entertainment Australia is extremely excited to announce that THE VERONICAS brand new single ‘In My Blood’ has reached number one on the ARIA Singles Chart this week.

Written in conjunction with Australia’s premium song-writing and production team, David Musumeci and Anthony Egizii aka DNA Songs, ‘In My Blood’  has captivated the nation since its release on 10th June . The response from the Australian public to not only the single but also the return of The Veronicas has been overwhelmingly positive resulting in their third number one in their career. ‘You Ruin Me’ debuted at No.1 on the ARIA Singles Chart (their second chart topper after ‘Hook Me Up’ in 2007) and sold over 200,000 copies going triple platinum. It became their second UK Top 10 hit (behind ‘Untouched’ in 2009) and went Top 40 on the US Adult Contemporary chart. ‘If You Love Someone’ and ‘Cruel’, also lifted from their platinum self-titled album, followed ‘You Ruin Me’.

“We’re beyond thrilled that ‘In My Blood’ has taken #1 this week. We’re lucky and extremely thankful to be embraced so warmly by Australia. To have the first piece of our new album connect this strongly is an incredible feeling and we can’t wait to share it with you all.” Lisa & Jessica Origliasso

Denis Handlin AM, Chairman & CEO Australia & New Zealand and President, Asia, Sony Music Entertainment, commented: “I am incredibly proud of The Veronicas achieving their 3rd No 1 single with their great track ‘In My Blood’. Lisa and Jess are amazing artists who continue to connect with their fans right across the country through their brilliant music and performances. They are also currently recording their new album which we will be excited to release later this year.”

‘In My Blood’ is the first track to be taken from The Veronicas album, set for release later this year.

The Veronica’s ‘In My Blood’ Reaches #1 On ARIA Singles Chart!