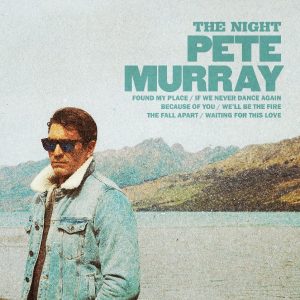 Today Pete Murray announces his forthcoming EP THE NIGHT is set for release Friday March 26 via Sony Music Entertainment Australia.
THE NIGHT EP IS AVAILABLE FOR PRE-ORDER NOW
Alongside the EP announcement, the ARIA nominee and one of Australia’s most loved singer songwriters shares a second taste of the EP with ‘Waiting For This Love’. The track, the only on the record Pete wrote solo, traces light and shade as the chorus lifts with strings and a chorus of backing vocalists. The visuals guided Pete for this contemplative track, “I had a really strong vision of a guy in a big coat not sure whether to leave a house, (which represents a relationship). The thought of walking out into the moonlight was a very desperate scene.”
LISTEN TO ‘WAITING FOR THIS LOVE’ HERE

Recorded in his hometown of Byron Bay, THE NIGHT EP, is inspired by his family and the life experiences that have gotten him to where he is today. It’s a poignant, introspective EP that highlights Pete’s iconic vocals with modern acoustic pop sound and propels Pete further into the iconic easy listening sphere that he’s well-loved for.THE NIGHT EP marks Pete’s first experience of co-writing, as Pete recalls “Co-writing was something that I had never done before so I was pretty nervous about it. There are a lot of great writers over in the States and I felt the pressure of not wanting to let anyone down.” Writing in Nashville and LA though clearly paid off and after his first writing session, Pete walked away with the first single from the EP, ‘Found My Place’. In a nod to the original Pete released an official acoustic version for the single last week, available HERE.

Adapting swiftly to COVID, Pete Murray has created the ‘The Byron Sunday Sessions’. As part of the YouTube series, Pete chats with fellow musicians and friends to talk life and of course perform some tunes. So far Pete was joined by Andrew Stockdale, from ARIA Award winning band Wolfmother, Ash Grunwald, Kyle Lionheart, The Buckleys and more. Pete has also performed ‘Found My Place’, along with classics ‘Opportunity’, ‘ Bail Me Out’ and ‘Feeler’ at his picturesque home.
SUBSCRIBE TO PETE’S YOUTUBE TO KEEP UP TO DATE WITH ‘THE BYRON SUNDAY SESSIONS’
One of few artists with over 1 million album sales under his belt, Pete isn’t showing any signs of slowing down.  With an impressive haul of robust singles and two EPs, there is more exciting music coming from the Byron local.
THE NIGHT EP TRACKLISTING
1.             Found My Place
2.             If We Never Dance Again
3.             Because Of You
4.             We’ll Be The Fire
5.             The Fall Apart
6.             Waiting For This Love
Pete Murray announces new EP ‘The Night’ set for release March 26