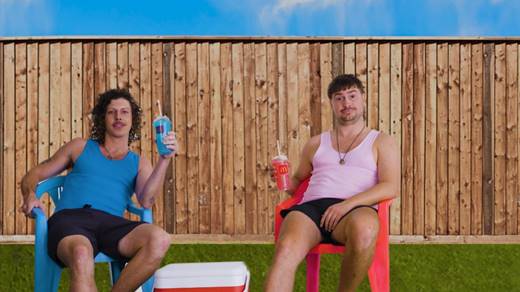 Peking Duk and Macca’s have announced that they will take a fan (and a mate) on an epic adventure of a lifetime – the lucky winner will hit the road with Peking Duk on The Biggest Tour Ever thanks to Frozen Fanta Flavours at Macca’s.

Coming together for the ultimate summer partnership, Peking Duk and Macca’s are offering fans the chance to really mix-it-up by going to every Peking Duk show in major Australian cities, plus hang out with Adam and Reuben at a special soundcheck performance.

With 36 Frozen Fanta Flavours now available Macca’s, all fans will need to do is head to novafm.com.au and tell us their favourite flavour combination and why, for the chance to win.

The partnership and competition arrives off the back of the launch of Peking Duk’s most exciting tour to date, Peking Duk’s Biggest Tour Ever, tickets available HERE.

Peking Duk said, “We both started out working at the Dickson Macca’s in Canberra so it’s gold and a pretty wild ride to come full circle and now be working with them. We’re stoked to be able to bring people VIP to the shows with the comp too! Great times.”

2019 is bound to be Peking Duk’s most exciting and diverse year to date. Their incredible talent continues to evolve as they surprise the public with ventures like releasing a children’s book, ‘DJDUKS’, and opening one of the hottest bars in Melbourne, Talk To Me. And that’s just in the past three months.

The ARIA Award winners have amassed over 270 million streams globally and accredited over 1.2million ARIA units. They have taken their live show far beyond Australian borders, performing to sold-out crowds in venues and festivals across the US, UK, Asia and Europe.

Peking Duk will hit the road again at the end of March for The Biggest Tour Ever. After selling out The Wasted Tour across Australian capital cities last year, the duo will share the epic live show and reveal brand new music to 50,000 fans across capital cities and regional areas. Over 3 months starting in March, The Biggest Tour Ever will hit Canberra, Byron Bay, Brisbane, Wollongong, Sydney, Coffs Harbour, Cairns, Townsville, Airlie Beach, Launceston, Hobart, Adelaide, Perth and Melbourne. Head to pekingduk.com for tickets.

Peking Duk & Macca’s will take a fan on The Biggest Tour Ever… So Far!