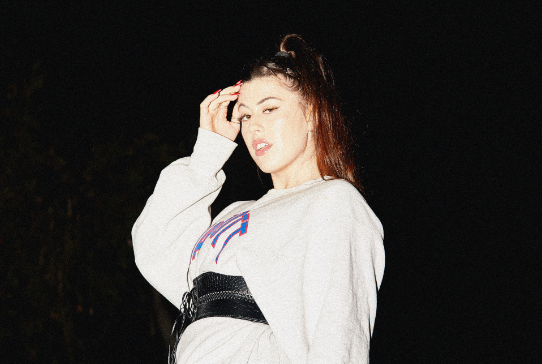 Australian pop prodigy Kota Banks once again proves she’s one of the country’s most prolific and boundary-pushing artists with her new track ‘Never Sleep’,out today via Sony Music Entertainment Australia.

The new single will feature on her sonically diverse forthcoming EP SWEET AND THE SPICE out July 31, and follows the previously released EP singles – garage banger ‘Let U Leave’ and empowerment anthem ‘Snip Snip’.

In ‘Never Sleep’, Banks’ pitch-shifted vocals float over a throbbing dance track, further cementing her reputation as a musical chameleon.

“I was feeling wild with this song!” says Banks about the track. “I’ve been dying to do a fun dance song for ages, but this actually started as a much more downtempo RnB moment. I wrote the melody and lyrics over this really dark slow, sexy beat and brought it into the studio.

“My producer ChunkyLuv heard it and immediately sped the vocals up, and actually re-produced the whole beat that night! It was maybe the quickest song I’ve ever written, it took about 20 minutes, and I’m so excited that it gets to be this cool fun unpredictable moment in my catalogue.

“It’s also a shout out to my insomnia, I’ve never related to one of my own song titles so much.”

It’s been a massive couple of years for the Sydney based songwriter, with the release of tracks ‘20 Missed Calls’, ‘Big Bucks’, ‘Feel Again’ and ‘Italiana’, as well as a high profile collaboration with Norwegian super producer Cashmere Cat on two tracks from his new album PRINCESS CATGIRL (‘Watergirl’ and ‘Without You’) and work on SOPHIE’s 2018 album OIL OF EVERY PEARL’S UN-INSIDES.

At the end of last year, Banks completed the Spilt Milk Australian tour alongside the like of Khalid, CHVRCHES and Tones and I.

Earlier this year, she took on Travis Scott’s ‘Sicko Mode’ for triple j’s Like a Version, receiving rave reviews from music press and listeners alike, with one caller saying they burst into tears after listening to her phenomenal take.

Stay tuned for more from the ever prolific and always forward-focused song writing machine that is Kota Banks very soon.