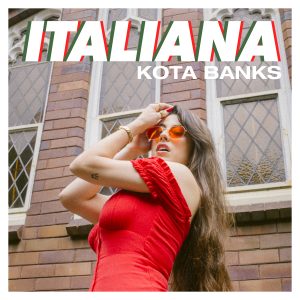 The track showcases Banks’ lyrical prowess, spitting the verses before flipping to an almost-operatic refrain, all the while giving a well-deserved shout out to one of life’s simple pleasures – eating; in particular Italian food.

“’Italiana’ is an ode to my heritage and a song about one of my favourite components of Italian culture: eating”, Banks says. “Pasta, focaccia, parmigiano, I love it all. I wanted a song that expressed my passion for this simple pleasure in life, because I never had a song I could listen to for that… there aren’t really songs about / dedicated to food, so it became an exciting challenge for me to write one tastefully – no pun intended, lol.”

It’s been a massive 18 months for the Sydney based songwriter, with the release of tracks ‘20 Missed Calls’,  ‘Big Bucks’ and ‘Feel Again’, a high profile collaboration with Norwegian super producer Cashmere Cat on two tracks from his new album PRINCESS CATGIRL (‘Watergirl’ and ‘Without You’) and work on SOPHIE’s 2018 album OIL OF EVERY PEARL’S UN-INSIDES.

At the end of last year, Banks completed the Spilt Milk Australian tour alongside the like of Khalid, CHVRCHES and Tones and I. Recently, she took on Travis Scott’s ‘Sicko Mode’ for triple j’s Like a Version, receiving rave reviews from music press and listeners alike, with one caller saying they burst into tears after listening to her phenomenal take.

After a swag of buzzworthy tracks and a forward-thinking mixtape PRIZE with long-time producer Swick on Nina Las Vegas’ label NLV Records over the last two years, rising star Kota is releasing her new music with Sony Music Entertainment Australia.

Talent and determination have paid off for the performer whose debut hook-laden single ‘Empty Streets’ with MOZA boasts 19 million streams, alongside millions of plays for singles ‘Holiday’, ‘Zoom’ and ‘I’m It’.

With her infectious melodies, clever tongue-in-cheek lyricism, fresh beats and a big dose of confidence, it’s not hard to see why Kota has captured attention. Alongside her own growing catalogue and her Cashmere Cat collaborations, Kota also wrote and performed with groundbreaking producer SOPHIE on the track ‘Not Okay’ from the 2018 Grammy Nominated album ‘Oil of Every Pearl’s Un-Insides’.

“I would go to the Duomo, which is the big cathedral in the heart of Florence, for singing lessons. They were opera lessons, actually. Growing up, I did musicals and plays and debating at school. I was very much a drama kid.”

Now, oozing self-belief and a vision in her work that belies her 25 years, Kota credits these formative years with not only setting her on her current path to success but for also giving her the strength to put herself out there to begin with.

Empowerment is a common thread through Kota’s catalogue, and she adds a vital voice to a music scene now buoyed by upcoming strong, talented and self-determined women. With much more music to come, the prolific writer also has a few other tricks up her sleeve.

“I’m totally unable to focus on anything else, but when it comes to writing and creating, I can do it for 10 hours a day and zone out of everything else. Where do I find the time? I don’t know, but I just have to. I love it and live it and breathe it.”