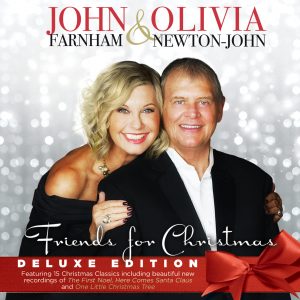 When John Farnham and Olivia Newton-John’s Two Strong Hearts joint tour finished the two friends didn’t want the fun to end. That tour, which spawned a No.1 album and DVD, lit a creative fire which has become their festive feast FRIENDS FOR CHRISTMAS. Returning with the new deluxe edition, John and Olivia hit the studio to record new versions of their favourite Christmas classics as duets.

As John Farnham explains, “I have always loved working with Olivia. To record a Christmas album seemed like the right, almost inevitable thing to do. I hope everyone enjoys listening to it as much as we loved recording it together”.

“It was such a joy singing these beautiful holiday songs with my favourite singer and good mate John Farnham,” said Olivia Newton-John.  “The holidays are about family and friends and having this chance to sing these classics with John was pure fun from beginning to end!”

With their impressive careers, this isn’t ARIA Hall of Fame buddies John and Olivia’s first time at the Christmas album rodeo. Farnham released CHRISTMAS IS…. in 1970, including the self-penned ‘Good Time Christmas.’ Olivia is also no stranger to Christmas albums, making TIS THE SEASON with country singer Vince Gill in 2000, then CHRISTMAS WISH in 2007 and THIS CHRISTMAS with John Travolta in 2012. Together, their FRIENDS FOR CHRISTMAS album reached #1 on the ARIA Chart and received Platinum sales.

Fans who saw John and Olivia live on their Two Strong Hearts joint tour, or relived the joy on DVD, will be thrilled to invite them into their homes this Christmas. Two iconic, timeless voices singing 15 iconic, timeless songs.

FRIENDS FOR CHRISTMAS DELUXE EDITION is out now!