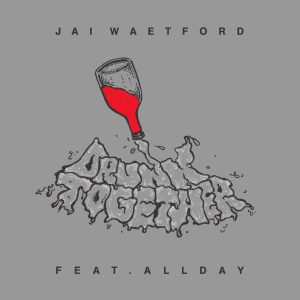 ‘Drunk Together’ showcases the continually evolving sound from JAI, for which there’s further tracks set to be released over the course of the year. Co-written with ALLDAY and CAMERON LUDIK (HILLTOP HOODS, SETH SENTRY) and recorded in Melbourne at ALLDAY’S studio, ‘Drunk Together’ is a coming of age song for the next generation, pairing JAI’S vocals with the melodic voice of ALLDAY for this somehow nostalgic track.

As JAI explains, “This has been a big year finding my sound and working with a whole bunch of people – I couldn’t be more proud or excited to have ‘Drunk Together’ be the first listen of what’s to come.”

The digital savvy 18 year old has been building his online empire generating over 130 million streams to date across Spotify and YouTube, with over 800,000 subscribers to his channel!

Having supported international superstars LITTLE MIX on their recent ‘Get Weird’ Australian tour, SELENA GOMEZ on her ‘Revival Tour’ throughout Asia, JAI is keen to return to the stage showcasing his infectious pop sound and charismatic stage presence. M&G tickets to both Sydney and Melbourne are now completely sold out, check out tour dates below.

Tickets are on sale now and are available via: www.jaiwaetfordofficial.com