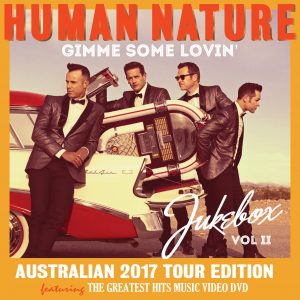 GIMME SOME LOVIN’: JUKEBOX VOL II (AUSTRALIAN 2017 TOUR EDITION) will feature all 15 tracks from the original release including their new original song ‘Forgive Me Now’, as well as a DVD of all of the group’s career music videos together as a greatest hits video release.

Recently, Human Nature announced a second show for Melbourne on their highly anticipated national tour, Human Nature – The Ultimate Jukebox Tour, set for February 2017. Human Nature – The Ultimate Jukebox Tour will take audiences on an unforgettable journey through 60 years of music, and the guys’ 26 year career. Starting with the classics of the Doo-Wop era, Human Nature (together with their US 7 piece band and dancers) will pay tribute to the legends of Pop, Motown & Soul, bringing to life their own chart topping songs as well as carrying influences through to today’s breakout sensations. They’ll even bring out your inner teenage fan girl with their original boyband hits and other favourites that’ll have the ladies swooning. Anticipate everything from ‘Under the Boardwalk’ to ‘Uptown Funk’. Everyone will be dancing in their seats and singing along to the ultimate playlist LIVE in this two hour spectacular!