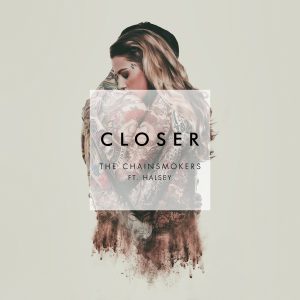 Sony Music Entertainment Australia is excited to confirm that The Chainsmokers single ‘Closer’ featuring Halsey has held the #1 position on the ARIA singles chart for nine consecutive weeks.

The Chainsmokers single ‘Closer’ is now the longest running #1 single for 2016!

Alex & Drew were thrilled to hear the news, saying:

“Is there any better news than waking up and finding out you have had the longest running ARIA #1 single in Australia this year. Let me tell you, the answer is no! We cannot believe what our song has achieved. We want to thank everyone in OZ who has supported our music and shared it with a friend. We cannot wait to come back and make so many memories with you all and a huge thank you also to Sony Music for giving us a presence in a country we so unfairly don’t get to visit enough!”

‘Closer’, featuring vocals from rising star Halsey and the duo’s own Drew Taggart is already 3 x Platinum in Australia, with the lyric video directed by Rory Kramer accumulating over 380 Million views.

The release of ‘Closer’ comes hot on the heels of the duo’s two massive smash hits this year, ‘Roses’ ft. Rozes and ‘Don’t Let Me Down’ ft. Daya, both of which are already 3 x Platinum in Australia. Earlier this year, ‘Roses’ steadily climbed the charts reaching #3 on the iTunes chart and top 5 on the ARIA chart. ‘Don’t Let Me Down’ ft. Daya, which was named one of Rolling Stone’s “30 Best Songs of 2016 So Far”, followed, serving as Alex and Drew’s second Top 5 hit on the ARIA chart (alongside ‘Roses’), while also accumulating nearly 400 Million streams on Spotify worldwide. The official ‘Don’t Let Me Down’ videos have racked up over 300 Million combined views to date, and the track still maintains positioning in the Top 40 airplay chart.

THE CHAINSMOKERS ‘CLOSER’ IS THE LONGEST RUNNING #1 SINGLE ON THE ARIA CHART THIS YEAR!