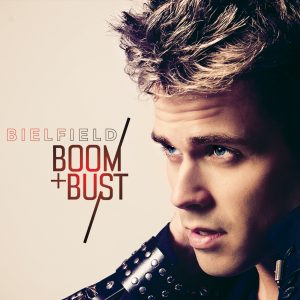 Sony Music Entertainment Australia is excited to announce that US-born singer/songwriter, Bielfield has today released his debut EP BOOM AND BUST, which is available to purchase/stream now.

The 6 track EP features the latest single and title track, ‘Boom And Bust’, his debut single ‘Frequency’ which was released in September last year and the LGBT anthem, ‘Kings & Queens’. Producer/songwriter Louis Schrool praises the uniqueness of this project. “Bielfield’s vocal ability is like no other. He’s got 5 octaves, so he can literally sing anything. It’s a joy to work with someone that talented. I don’t think I’ve ever heard a man singing whistle-tone, but that’s exactly what he does…It’s quite simply unbelievable.”

Living in his ‘adopted-home’ of Sydney since early 2015, Bielfield has spent time developing his pop musical-identity.

“It took a long time for me to work out the right style of music for me… The truth is, despite my classical training, the only music I really sit down and listen to is pure pop, R&B and rap music…I finally let my mind and creativity free, to become more myself – set loose the beast inside – and discovered a world of music I had only ever dreamed of creating.”

You can catch Bielfield performing live to launch his EP BOOM AND BUST tonight at Arq, Sydney and if you’re in Cairns, the American pop sensation will be performing at the annual Admit Love party* on July 23rd.