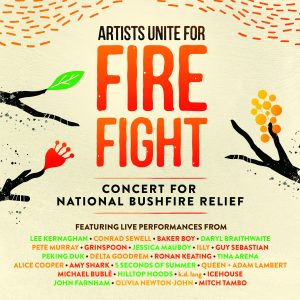 ARTISTS UNITE FOR FIRE FIGHT:
CONCERT FOR NATIONAL BUSHFIRE RELIEF
DEBUTS AT NUMBER ONE ON THE ARIA ALBUM CHART

ARTISTS UNITE FOR FIRE FIGHT: CONCERT FOR NATIONAL BUSHFIRE RELIEF has today debuted at the #1 spot on the ARIA Album chart.

The special charity album of 23 tracks features unique live recordings from every artist who performed at the historic Fire Fight concert last month. It is available as a two disc CD album from music retailers and as a digital download on iTunes. It is also available as a Direct To Consumer purchase as a standalone CD album or as an exclusive bundle.

Sony Music Entertainment Australia is donating all its proceeds from the sale of this album to Sony Foundation Australia and funds raised will go towards directly supporting young Australians in bushfire affected communities.

“Thank you to the Australian public who have come together to purchase this special charity album that provides relief for so many in bushfire affected communities. Our thanks once again go to the brilliant artists and our partners in making this all possible, as well as the Australian media who have extensively promoted this album through advertising and editorial coverage. We look forward to continuing to raise funds through the sale of this album. We truly appreciate everyone’s enduring and humbling support.”

The Fire Fight concert was held on Sunday, February 16, 2020, and a passionate sold-out audience of 75,000 fans came together at ANZ Stadium in Sydney to enjoy close to ten hours of stunning performances from international and Australian music superstars. The music event, promoted by TEG Dainty and TEG Live, has since raised over $10 million dollars for bushfire rescue, relief, recovery, rehabilitation and rebuilding causes and organisations.